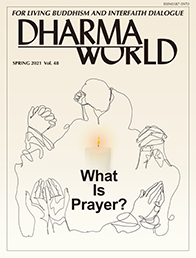 Religious Studies: The Key Concepts (Routledge, 2010) defines “prayer” as a form of communication between humans and higher powers. It also describes prayer as a way of evoking experiences, moods, emotions, and values by utilizing a network of symbols; a ritual act; and an act by which one identifies with and reinforces one’s membership in a community.

On the level of our lived experience, we may have observed that when people of many religious traditions lose members of their families or friends, they mourn their deaths and pray that their souls will rest in peace. We see many people attend memorial services held by national or local governments to pray for the victims of wars and natural disasters. Praying may also bring spiritual peace to those who pray and may help them regain the strength to go on with their lives despite the pain of loss.

Numerous scientific studies have found that prayer has some therapeutic effects. Generally, research has shown that people who pray regularly are less likely to become ill, and with prayer they tend to recover more quickly. Interestingly, the sick seem to benefit not only from their own prayers but from the prayers of well-wishers as well.

In many countries where the state and religion are officially separated, religion is considered to belong to the private sphere. Whether or not prayer should be permitted in public institutions is often a contentious issue. But is prayer an act that always promotes a religion? Cannot prayer be independent of religious faith? Is there such a thing as non-sectarian prayer, and if so, what would it entail?

Why do people pray? Is prayer a universal feature of religious traditions? How do different religions understand the act of praying, and what roles does it play in their traditions? What kind of effects does prayer have on the human mind and on society in general? Does prayer have power in and of itself? We will examine different aspects of the act of praying and what it means in the lives of people today.