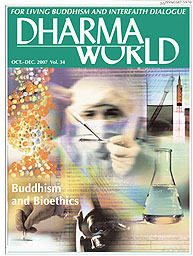 The role religion is expected to play is providing basic principles that lead people to true happiness and giving medicine and other sciences guidance on the direction in which they should go.

Katsumasa Imai is the director of the Chuo Academic Research Institute of Rissho Kosei-kai in Tokyo.

A Bioethics Question for Buddhists: When Does Human Life Begin? by Masao Fujii

The lack of universal principles of bioethics means that research on related issues must be transparent and comprehensive, and include the viewpoints of fields other than medicine.

Until he retired in 2004, Masao Fujii served first as professor and later dean of the Faculty of Literature at Taisho University in Tokyo, where he is now professor emeritus. He promoted research on the Japanese lifestyle based on the influence of religion through an anthropological approach. He is currently president of the Japan Association for Bioethics. He is also the translator of Bronislaw Malinowski’s The Dynamics of Culture Change (Yale University Press, 1945).

Religion and Bioethics: A Chapter in Their Shared History by William R. LaFleur

Visiting graves in America, although it did not include some of the Buddhist and Confucian components that are part of haka-mairi in Japan, appears to have been fairly common until sometime after World War II.

William R. LaFleur, the Saunders Professor in Japanese Studies at the University of Pennsylvania, taught earlier at Princeton and UCLA. In addition to his studies of medieval Japanese Buddhism, he is a senior fellow at Penn’s Center for Bioethics. Recently researching the approach to bioethical questions in Japan, he coedited (with Gernot Bohme and Susumu Shimazono) Dark Medicine: Rationalizing Unethical Medical Research in Germany, Japan, and the United States.

Transcending a Bioethics of Buddhist Compassion by Susumu Shimazono

Practicing compassion is not as simple as it may seem. It is not an unlimited good and may cause serious harm or loss to the person trying to demonstrate it.

Susumu Shimazono is a professor in the Graduate School of Humanities and Sociology at the University of Tokyo. His special fields are the comparative study of religious movements and the history of religion in modern Japan. He is the author of numerous books on religion, spirituality, and bioethics, and has served on the Japanese prime minister’s panel on bioethics.

One Buddhist View of Bioethics by Carl Becker

The Buddhist critique of the Western-style multinational medical and pharmaceutical industry is that it is less the product of compassion than of the money-making attachment of its purveyors.

Carl Becker is a professor in the Kokoro Research Center at Kyoto University, where he is doing research on terminal care and medical ethics. He has published numerous books on bioethics, death and dying, and near-death studies. In addition to teaching and research, Dr. Becker counsels suicidal clients, terminal patients, and bereaved students, and conducts workshops on improving medical communication and reducing burnout.

Religionists and Care for the Terminally Ill by Yoshiharu Tomatsu

Since doctors today have such badly crowded schedules, calls are growing for people of religion and specially trained professionals to undertake the spiritual care of patients facing imminent death.

Yoshiharu Tomatsu is head priest at Shinko-in, a Jodo Shu (Pure Land sect) temple in Tokyo and senior research fellow at the Jodo Shu Research Institute. He is a lecturer in religious studies at Taisho University and also teaches at the Keio University School of Medicine, both in Tokyo. He is co-editor of Traversing the Pure Land Path: A Lifetime of Encounters with Honen Shonin.

Buddhism and Palliative Care in Japan by Masahiro Tanaka

The nation’s hospitals are sorely lacking in spiritual-care workers who can help ease the pain of patients facing imminent death.

Masahiro Tanaka is now chief priest at Saimyoji in Tochigi Prefecture. Until 1983, when his father, who was the chief priest of that temple, passed away, he served as a physician at the National Cancer Center at Tsukiji in Tokyo. Within the temple, he opened a medical clinic called Fumon-in. It includes a palliative care unit, whose main task is the relief of both physical and spiritual pain.

Building Bridges for the Promotion of Life, Justice, and Peace by Juan Masia

A Roman Catholic priest describes the basic importance of cooperation among different fields of science, philosophy, and religion for achieving the ultimate benefit for humanity.

Juan Masia an ordained Roman Catholic priest, was formerly professor of ethical theology and the history of philosophical thought in the Faculty of Theology at Sophia University, Tokyo, where he is now a professor emeritus. From 2004 to 2006 he served as the director of the Institute of Life Ethics at Comillas Pontifical University, Madrid.

The Power to Live by Nichiko Niwano

With the understanding that we are granted life by the life of the Buddha, we cannot help but feel moved and joyful at each of the teachings.

This essay is part of a continuing series of translations from a volume of inspirational writings by the late founder of Rissho Kosei-kai. Dharma World will continue to publish these essays because of their lasting value as guidance for the practice of one?s daily faith.

This article presents briefly the relationship between Buddhism, Gross National Happiness (GNH), and the economy. GNH is not exclusively an aspect of Buddhism. However, in this article, which was written especially for Dharma World, the links between GNH and Buddhist understanding of reality are explored. Nonetheless, it must be understood that because of the wide applications of GNH, it can also be discussed in a completely secular context such as health, politics, the economy, education, the environment, communications, and technology. GNH’s relevance is, in fact, mostly in practical public policy fields.

Dasho Karma Ura is the director of the Centre for Bhutan Studies, an autonomous think tank located in Thimphu that encourages public discourse on Bhutanese society. He also serves on several national and international committees. He is the author of a number of books and articles on Bhutanese history, culture, and literature, including The Hero with a Thousand Eyes.

The encounter between two spiritual giants of the modern era has led to lasting cooperation of the most meaningful kind in ways that benefit all of humanity. This essay is based on an address delivered by the author at a symposium held by Religions for Peace and Rissho Kosei-kai of New York at the Japan Society in New York to commemorate the centennial of the birth of the late founder of Rissho Kosei-kai, Rev. Nikkyo Niwano, on December 14, 2006.

Donald W. Mitchell is a professor of comparative philosophy of religion at Purdue University in West Lafayette, Indiana. He has served as a consultant for dialogue with Buddhism at the Vatican’s Pontifical Council for Interreligious Dialogue and the U.S. Conference of Catholic Bishops and is active in the Focolare Movement. One of his most recent books is Buddhism: Introducing the Buddhist Experience.

Self-Reliance and Liberation from Poverty by Dhammananda Bhikkhuni

Women are independent and must be responsible for their own spiritual development. This message is supreme, not only in the context of Buddhism, but also in the history of world religions.

Ven. Dhammananda Bhikkhuni (Dr. Chatsumarn Kabilsingh) is an activist in social justice and women’s issues in Asia. She taught religion and philosophy at Thammasat University in Bangkok for twenty years. She was ordained in 2001 by a Sri Lankan bhikkhuni (female monk) in the presence of a Thai bhikkhu (male monk) and assumed the name Dhammananda.

“The Flower Opens in the Sheer Drop” by Notto R. Thelle

One could call Keiji Nishitani (1900-1990), one of Japan’s leading philosophers, a Socratic Buddhist, one who sought answers and got other people to see by means of the questions he put to them.

The Sutra of the Lotus Flower of the Wonderful Law Chapter 12: Devadatta (3) by Nikkyo Niwano

This is the ninety-first installment of a detailed commentary on the Threefold Lotus Sutra by the late founder of Rissho Kosei-kai, Rev. Nikkyo Niwano.