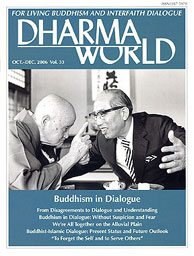 Yasutaka Watanabe is the chief executive for dissemination affairs at Rissho Kosei-kai.

From Disagreements to Dialogue and Understanding by Yasuaki Nara

From his own wide range of experience, the author has become convinced that meaningful dialogue can help to bring about mutual understanding, compassion, and self-reform.

Until he retired in March 2006, Yasuaki Nara served first as president and later as chancellor of Komazawa University, where he is now a professor emeritus. The author of numerous books on Buddhism, he received a Litt.D. from the University of Tokyo in 1973 and taught the history of Buddhist culture at Komazawa University. He is currently a member of the Peace Research Institute of the Japanese Committee of the World Conference of Religions for Peace.

Buddhism in Dialogue: Without Suspicion and Fear by Gerhard Koeberlin

Recent examples of dialogue in action in Germany have involved Muslims and Buddhists there acting on their common environmental responsibility, especially involving climatic change.

Gerhard Koeberlin, now retired, is the former director of studies at the Academy of Mission at the University of Hamburg. A minister of the Evangelical Lutheran Church in Bavaria, he is a founding member of the European Network of Buddhist-Christian Studies 1996 and chairperson of the German Asia Foundation in Essen.

We’re All Together on the Alluvial Plain: Anecdotal Accounts of the Necessity for, and Challenges to, Interreligious Dialogue by Kenneth K. Tanaka

Our world seems to have become closer and smaller with technological advancements in communication and transportation, a state aptly described by the well-known phrase “global village.” The Internet, for example, enables us to be in touch with people everywhere, exchanging large amounts of information quickly and inexpensively. More people around the globe are traveling greater distances more frequently. . . .

Kenneth K. Tanaka is a professor at Musashino University, Tokyo. He received his Ph.D. from the University of California, Berkeley, in Buddhist Studies. In 1978 he was ordained a Jodo Shinshu priest and currently serves as president of the International Association of Shin Buddhist Studies. He has been an active member of the International Buddhist-Christian Theological Encounter sessions centered at Purdue University in Indiana.

True interreligious dialogue does not mean people of different faiths merely tolerating or coexisting with one another. Even less does it mean simple exchanges of information or simple insistence on one’s own point of view.

Yoshiaki Sanada is a professor of law who has taught Western legal history and comparative law based on Islamic law at Chuo University’s School of Law in Tokyo. Since 1994 he has been a guest professor at the Institute of Comparative Law of the China University of Politics and Law in Beijing. He is also director of the Peace Research Institute of the Japanese Committee of the World Conference of Religions for Peace.

“To Forget the Self and to Serve Others” by Stephen Covell

In the modern period, the priesthood and institutions of Temple Buddhism have been challenged to recreate or reinvigorate Buddhist practice. One avenue pursued has been to engage society through such means as interfaith dialogue. Ven. Etai Yamada (1895-1994), the 253rd head priest (zasu) of the Tendai sect, played an instrumental role in addressing this challenge. . . .

Stephen Covell is an assistant professor at Western Michigan University in Kalamazoo, teaching comparative religion. Until the summer of 2003 he was a visiting scholar at the University of Tokyo, where he was working on a project concerning Buddhism and morals education in Japan. He received his Ph.D. from Princeton University in 2001. He is the author of Japanese Temple Buddhism: Worldliness in a Religion of Renunciation (University of Hawaii Press).

Members of a local Rissho Kosei-kai branch in Tokyo have become actively involved in meaningful interreligious dialogue with representatives of other faiths who are also their neighbors.

An Indian-born artist, now living in the U.S., overcomes a birth defect to achieve success as a producer of multicultural greeting cards.

Jacqueline Ruyak lived in Japan, including Kyoto, for many years. She now divides her time between Pennsylvania and Tono in northeastern Japan. Her essays on religion and Japanese arts, crafts, and social topics appear frequently in Japanese and American magazines.

The Death and Resurrection of Our Words by Notto R. Thelle

It is said that the Buddha proclaimed his teaching for fifty years but never said one single word. When words crumble away, we can find the silence wherein God’s mystery is vibrantly alive.

Notto R. Thelle, D.Th., is a professor in the Faculty of Theology, the University of Oslo, Norway. Having studied Buddhism at Otani University in Kyoto, he acted as associate director of the NCC (National Christian Council) Center for the Study of Japanese Religions in Kyoto from 1974 to 1985, where he was a visiting scholar in 1999 and 2000. He is the author of numerous books and articles. This essay is a translation of part of his book, which was published in Norwegian.

Why Rules Are Important by Kinzo Takemura

Another meaning for “rule” is good habits. Bad lifestyle habits can have unexpectedly serious results.

The Family of King Wonderfully Adorned by Gene Reeves

Sometimes it is the children who, in a reversal of the usual role, are able to lead a parent to the truth.

Helping One Another by Nichiko Niwano

Although we take our daily lives for granted, we owe a great debt of gratitude to many people and things, and to all of nature.

The Sutra of the Lotus Flower of the Wonderful Law Chapter 11: Beholding the Precious Stupa (3) by Nikkyo Niwano

This is the eighty-eighth installment of a detailed commentary on the Threefold Lotus Sutra by the late founder of Rissho Kosei-kai, Rev. Nikkyo Niwano.