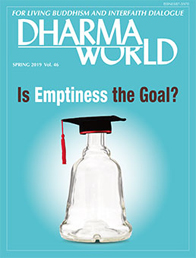 Is Emptiness the Goal?

Emptiness (shunyata) is a key concept in Buddhism. It is commonly associated with the Prajnaparamita sutras, and often understood to mean “nothing possesses a fixed, inherent nature because all things arise through causation and exist interdependently.” The realization of emptiness thus allows people to free themselves from attachments to things and events and attain spiritual tranquility.

Emptiness is also mentioned in several chapters of the Lotus Sutra, where it is described as a condition that allows people to enter the bodhisattva path of the One Vehicle.

The Buddhist concept of emptiness is even compared to some Christian notions of God (John Cobb, Jr.) and with the concept of kenosis, or Christ’s emptying of his personal will to become receptive to the will of God (Thomas Merton).

Although emptiness is an important concept, its meaning is multifarious and a clear understanding of it is not easy to achieve. It is open to multiple interpretations and often misunderstood to mean that everything is unreal, thus conjuring a sense of nothingness or hopelessness. However, many Buddhists understand the realization of emptiness to be the ultimate spiritual awakening―the goal of their Buddhist practice.

Emptiness is essential to both doctrine and practice. It is also a popular topic of meditation, especially in America. In the next issue, Dharma World will explore the concept and practice of emptiness: How it is understood and practiced by modern Buddhists, especially in the West; how it is employed in interreligious dialogue; what significance it has in the Lotus Sutra; and how it can be applied as a means to deal with conflicts in the world today.