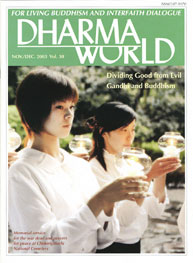 The Importance of a Bonding Sutra by Nikkyo Niwano

The Buddha said, “Put the welfare of others before your own.” Buddhism teaches that your own benefit and that of others are one and the same.

Many Paths, One Mountain by Richard Boeke

Although there are many paths up the mountain, they all lead to the same goal. Our paths may be different, but we share the mountain as well as the goal.

David R. Loy is professor in the Faculty of International Studies at Bunkyo University, Chigasaki, Japan. His specialty is comparative philosophy and religion, particularly comparing Buddhism with modern Western thought. His books include Nonduality: A Study in Comparative Philosophy (1988) and A Buddhist History of the West: Studies in Lack (2002). He has practiced Zen Buddhism for many years. The original version of this article is included in his new book, The Great Awakening: A Buddhist Social Theory (Boston: Wisdom, 2003).

A Great Treasure Is Very Near by Gene Reeves

Having a good attitude toward life means seeing everything that comes to us as a gift, more especially as an opportunity, as what we call a “learning experience.”

Gene Reeves is currently studying, teaching, and writing on Buddhism in Tokyo. A consultant and teacher at Rissho Kosei-kai, he was recently a research fellow at Rikkyo University and prior to that retired from the University of Tsukuba. Before coming to Japan in 1989, Dr. Reeves was the head of Meadville/Lombard Theological School and professorial lecturer in the Divinity School of the University of Chicago.

While promoting cultural exchange between India and Japan as president of the Sarvodaya Indo-Japanese Culture Center in Tokyo, Dr. Naresh Mantri has been engaged in the translation of Kumarajiva’s Chinese version of the Lotus Sutra into Hindi. During a recent interview with Dharma World in Tokyo he emphasized the need to understand the Gandhian philosophy of nonviolence as a guiding principle for the twenty-first century.

Look Upon All with a Mother’s Eyes

An interview with Ven. Nyichang Rinpoche

Nyichang Khentul Rinpoche was born on the eighth day of the second month of the Wood Boar year (by the Western calendar, April 10, 1935) in the Kyidong valley of southwestern Tibet. He was born in a small village of fewer than 30 dwellings that lay amid the mountains near the border with Nepal. The villagers were mostly devotees of esoteric (Tantric) Buddhism, and his family maintained the post of head priest of the village temple. At the age of seven he was sent to Drepung, one of the three great Gelug colleges, but shortly thereafter his father removed him from Drepung and placed him under the tutelage of the great yogini Shugsep Jetsun Lochen Chonyi Zangmo Rinpoche of Shugsep Temple. His recognition by this realized teacher-practitioner as a tulku (reincarnated lama) was later acknowledged by Drukpa Thukse Rinpoche, who pronounced him to be the reincarnation of Drukpa Sangye Dorje–a great poet and the main disciple of Padma Karpo, sixteenth-century head of the Drukpa Kagyu sect. He also studied at the Nyingma head temple of Mindrolling as well as the small but excellent Nyima Changra Monastic College (from which his name, Nyichang, derives), and was able to receive instruction under Chodrak Rinpoche, Poba Tulku Rinpoche, Khenpo Tsenden Sangpo Rinpoche, and, after fleeing occupied Tibet, Dudjom Rinpoche, Dilgo Khyentse Rinpoche (who were both former heads-in-exile of the Nyingma School), His Holiness the Dalai Lama XIV, and others. For more than a quarter of a century, he has lived in Japan, to which he came at the request of the Dalai Lama, and where he transmits the Dharma to all who are sincerely interested, regardless of nationality, with absolute fidelity to tradition, while he remains one of the greatest living scholar-monks of the Nyingma tradition. On behalf of Dharma World, Ven. Nyichang Rinpoche was interviewed by Stephen Comee, our copy editor and his student, at Rinpoche’s residence in the suburbs of Tokyo in May and June.

Grateful for the Gift of Life by Yasuyo Iijima

A young woman whose family has long had close ties to Rissho Kosei-kai describes how taking the Buddha’s teaching to heart helped them to overcome difficult times.

Yasuyo Iijima is a member of the Mito Branch of Rissho Kosei-kai in Ibaraki Prefecture.

Pukkusa’s Acceptance of the Buddha’s Teachings by Hajime Nakamura

After he heard the Venerable Master describe his own experience in learning tranquillity, the youth of the Mallas rejected his former faith as if a torch had been raised in the darkness, and took refuge in the Dhamma.

The Sutra of the Lotus Flower of the Wonderful Law
Chapter 7: The Parable of the Magic City (4) by Nikkyo Niwano

This is the seventy-third installment of a detailed commentary on the Threefold Lotus Sutra by the late founder of Rissho Kosei-kai, Rev. Nikkyo Niwano.