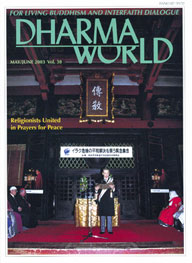 Religionists United in Prayer for Peace

The Difficulty of Real Compassion by Nikkyo Niwano

Counting Our Blessings by Nichiko Niwano

We can only realize true happiness and be filled with the joy of life when we give thanks for all our blessings. Such gratitude is the key to being able to accept as precious everything that comes to us.

Although we often encounter the name of the monk called Shariputra, we do not know much about him. Sometimes portrayed as a dunce, it is to him that Shakyamuni expounded the second and third chapters of the Lotus Sutra. Just who was Shariputra, and what can we learn from his story?

The Other Side of Time by Donald S. Harrington

Donald S. Harrington has been a Unitarian Universalist minister since 1936 and is now a minister emeritus of the Community Church of New York and chair of the Council on International and Public Affairs of New York City. He is also a past president of the World Federalist Association.

Globalization for the Common Good by Kamran Mofid

Kamran Mofid, a British national, was born in Tehran, Iran, in 1952. In 1986 he was awarded a doctorate in economics from the University of Birmingham, U.K. From 1980 onward he has been teaching economics, business studies, international business, and the political economy of the Middle East. In recent years, Dr. Mofid has developed short courses, seminars, and workshops on economics and theology, the economics of the common good, and an interfaith perspective on globalization. In 2002 he founded an annual international conference “An Inter-faith Perspective on Globalisation.”

The Oneness of Religions by Harold Rosen

All the major world religions teach the same broad set of moral and spiritual guidelines, this writer points out, and their view of the good person is essentially the same.

Harold Rosen served as a Unitarian minister for 25 years, 13 years at the North Shore Unitarian Church, West Vancouver, and is now a Baha’i interfaith educator and organizer in the Vancouver area. He is secretary of a Baha’i local spiritual assembly and assistant for interfaith projects to a Baha’i auxilliary board member. He has written three books and is currently working on a book/curriculum called “Teachers of Humanity: Founders of Faith and the Evolution of Global Civilization.”

To Look into the Face of Death Is to Ponder Life

An interview with Alfons Deeken

From even before the moment of our birth, human beings are inexorably moving toward death. To help us deal with the problem of life and death, Dr. Deeken advocates what he terms “death education,” through which he hopes others will gain a deeper respect for life.

Alfons Deeken is president of the Japanese Association for Death Education and Grief Counseling. He was born in Germany and received his education in Munich, Tokyo, and New York, earning a Ph.D. in philosophy from Fordham University. Until his retirement in March, Dr. Deeken was professor of philosophy at Sophia University in Tokyo; he is now professor emeritus. In 1982 he founded the Japanese Association for Death Education and Grief Counseling, which has chapters in 47 Japanese cities with more than 5,000 members. Dr. Deeken has published 26 books, mostly in the field of death, dying, bereavement, and grief. In 1998 he was awarded the Cross of the Order of Merit of the Federal Republic of Germany, and in 1999 he received the Tokyo Metropolitan Cultural Award from the city of Tokyo.

Raising Questions Is Our Responsibility

Last March 8, as a preemptive strike against Iraq by U.S. and U.K. forces was looming, many citizens and religionists in the United States and all across the world were apprehensive about the Bush administration’s determined choice of war and were calling for a peaceful resolution of the crisis. Against such a backdrop, Dharma World asked Rev. Sinkford, president of the Unitarian Universalist Association in North America, about how his organization was involved in efforts to prevent war.

William G. Sinkford was elected president of the Unitarian Universalist Association in June 2001. He was born in San Francisco in 1946; his commitment to liberal religion dates to his teenage years, when he was an active member of the First Unitarian Church of Cincinnati, Ohio. He graduated cum laude from Harvard University in 1968 and spent the following year in Greece as a Michael Clark Rockefeller Fellow. After college, Rev. Sinkford held management positions with large corporations, ran his own business, and later heard his call to the ministry. Toward the end of his theological education at Starr King School for the Ministry, Rev. Sinkford joined the staff of the UUA. He earned his M.Div. in 1995, and was fellowshipped as a community minister and ordained by his home congregation in the same year.

Adam Gorb studied music at Cambridge University and with Paul Patterson at the Royal Academy of Music in London. He has composed a wide variety of works, many of which have been performed around the world. Works include: Metropolis and Awayday for wind ensemble; Prelude, Interlude and Postlude for piano; Kol Simcha, a ballet; a string quartet; and Symphony No. 1 in C for the Royal Northern College of Music Wind Ensemble. Mr. Gorb was commissioned to write a work for the Tokyo Kosei Wind Orchestra’s 74th regular concert in Tokyo on October 18, 2002, in which the result, his Towards Nirvana, premiered. He is head of the School of Composition and Contemporary Music at the Royal Northern College of Music (Manchester, U.K.).

Peace of Mind Through Faith by Yumiko Yokoyama

In this speech, which she delivered in Los Angeles on November 10, 2002, a grateful woman relates how the teachings of Shakyamuni Buddha and the Lotus Sutra not only carried her safely through life’s vicissitudes, but also blessed her with the precious gift of life.

Yumiko Yokoyama is a member of Rissho Kosei-kai of Los Angeles.

Elegant Yakushi Nyorai from the Seventeenth Century by Takeshi Kuno

In the main hall of Toji in Kyoto sits the Medicine Buddha, known in Japanese as Yakushi Nyorai. Although he carved it in the seventeenth century, the Buddhist sculptor Kosho brilliantly succeeded in expressing the delicate eighth-century style in which the original sculptures it replaced are thought to have been made.

The Four Great Instructions Taught at Bhoganagara by Hajime Nakamura

We all need to decide for ourselves whether or not what we are told is an authentic teaching of Shakyamuni Buddha, by comparing it to the teachings found in the sutras and the Vinaya. By so doing, we will naturally become grateful for the Dharma.

The Sutra of the Lotus Flower of the Wonderful Law
Chapter 7: The Parable of the Magic City (1) by Nikkyo Niwano

This is the seventieth installment of a detailed commentary on the Threefold Lotus Sutra by the late founder of Rissho Kosei-kai, Rev. Nikkyo Niwano.