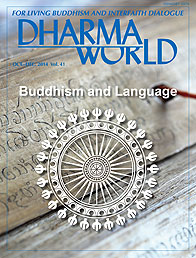 Religion in general has a close affinity with language, and both are vital components of any culture. Language is used to express and teach the religious truths that people of faith believe have been inspired by divine beings. Believers use language to explain and share spiritual insights.

Buddhism, especially Zen, however, values the kind of direct spiritual awakening that comes when the mind transcends language. This does not mean, however, that language is not vital to Buddhism. To record and share the Buddha’s teachings, numerous sutras and commentaries have been written and have been translated into many languages in the course of Buddhism’s transmission from one country to another.

Now that Buddhism is no longer a mainly Asian religion, but is embraced beyond Asia by millions of people in the West and other areas where Judeo-Christianity has prevailed, language has become more important than ever as a tool for people of different cultural backgrounds to share its teachings.

To gain an overview of what role language plays in Buddhism, we would like to approach the theme from the following angles: (1) the power of sutras; (2) the role of mantras and dharani in Buddhism in India, Tibet, and East Asia; (3) the significance of parables and similes; (4) the significance of language in revealed religion and the religion of awakening; (5) the pros and cons of using language as a means of spiritual liberation; (6) the difficulty of translating Buddhist sutras and commentaries into Western languages; (7) recent progress in worldwide spread of the teachings and the influence of linguistic and cultural differences on the teachings.