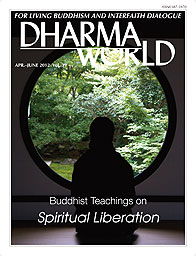 Our Buddha-Nature Is a Seed That Grows by Norio Sakai

Norio Sakai, former chair of the Board of Trustees of Rissho Kosei-kai in Tokyo, is a consultant to Rissho Kosei-kai and an international trustee of the World Conference of Religions for Peace.

Although many people in our modern, secularized world have rejected religious ways of thinking or have lost touch with spiritual resources previously available in their religious traditions, they search for a deeper grounding for living and serving that only spiritual disciplines can provide.

John Makransky is Associate Professor of Buddhism and Comparative Theology at Boston College, senior advisor to Chökyi Nyima Rinpoche’s Centre for Buddhist Studies in Nepal, and a board member of the Society of Buddhist-Christian Studies. He is guiding meditation teacher of the Foundation for Active Compassion, a socially engaged Buddhist organization, and the author of Awakening through Love (2007). His research focuses on Indian and Tibetan Buddhist thought and practice in their relation to contemporary needs and interfaith learning.

The Great Hesitation and the Great Liberation:
The Long and Short of Karmic R/Evolution by Mark Unno

Each of us individually and all of us collectively are responsible for the difficulties our species faces. That we are in this together, that we vow to take this journey together, not blaming one another but, rather, embracing our collective karmic responsibility, with a long view to its positive outcome, may be one way to approach the path to our liberation.

Mark Unno received his PhD from Stanford University and is Associate Professor of Japanese Buddhism in the Department of Religious Studies at the University of Oregon. His research is in classical Japanese Buddhism, in particular key practices in Shin Buddhism, Shingon, and Zen. He also works in the areas of comparative religious thought, Buddhism and psychotherapy, and interreligious dialogue. He is the author of Shingon Refractions: Myoe and the Mantra of Light (2004), the editor of Buddhism and Psychotherapy Across Cultures (2006), as well as a writer and translator of articles in the foregoing fields.

What’s Wrong with Me? Resolving the Lack of Self by David R. Loy

Our emptiness has two sides: the negative, problematic aspect is a sense of lack. The other aspect is being open to, and an expression of, something more than I usually understand myself to be.

David R. Loy is a professor, writer, and Zen teacher in the Sanbo Kyodan tradition of Japanese Zen Buddhism. He is a prolific author whose essays and books have been translated into many languages. His articles appear regularly in the pages of Buddhist magazines, including Tricycle, Shambhala Sun, and Buddhadharma, as well as in scholarly journals. David’s most recent book is The World Is Made of Stories (Wisdom Publications, 2010). He teaches nationally and internationally on various topics, focusing primarily on the encounter between Buddhism and modernity and what each can learn from the other.

The Conception of Suffering and Lotus Sutra Faith
in Two Stories by Kenji Miyazawa by Sarah M. Strong

Miyazawa’s familiarity with the Lotus Sutra and his faith in its saving power had a discernible influence on many of his stories: on their imagery, expressed concepts, and emotional tonality.

Sarah M. Strong is Professor of Japanese Language and Literature at Bates College, Lewiston, Maine. She received her PhD in Japanese literature from the University of Chicago. As a scholar she has focused on works that portray Japan’s natural beauty and rich ecosystems. Her studies and translations of Kenji Miyazawa’s works, including Night of the Milky Way Railway (1991) and Masterworks of Miyazawa Kenji: Poems and Fairy Tales (2002), have appeared in both the United States and Japan. Her most recent book is on Ainu oral traditions, Ainu Spirits Singing: The Living World of Chiri Yukie’s Ainu Shin’yoshu (2011).>

An Answer to “What Can I Do Right Now?” by Hitoshi Jin

Rather than cling to a particular religion’s protocols, ceremonies, and doctrines, we should be like Mother Teresa and simply ask ourselves how we can best help the people we meet.

Hitoshi Jin is executive director of the Zenseikyo Foundation for Youth and Child Welfare in Tokyo, a cooperative entity of more than sixty Japanese Buddhist denominations. He is also senior research fellow at the Institute for Engaged Buddhism. He works to support young people who contemplate suicide, refuse to go to school, or have other problems. He has also been involved in activities supporting the victims of the massive earthquake and tsunami that struck northeastern Japan on March 11, 2011.

Seeking spiritual liberation in modern times does not require isolating oneself from society. . . . The whole world and our society are the arena for Buddhist practice.

Venerable Dr. Yifa is a Taiwanese Buddhist nun, scholar, and writer. She was ordained by the Fo Guang Shan Buddhist Order in 1979. She has a PhD in religious studies from Yale University and has served as a department head and dean of the University of the West, Rosemead, California. Yifa has participated in many interfaith dialogues and has contributed to UNESCO in Europe’s Universal Ethics Project and to UNICEF South Asia’s Safe Motherhood Project. In 2003 the United Nations presented her its Outstanding Women in Buddhism Award. She is the founder and director of Woodenfish Project, which creates many cultural exchange programs between the East and the West for college students and scholars.

Japanese Buddhist Responses to the Earthquake and Tsunami by Miriam Levering

One aspect of Japanese Buddhists’ response to the March 11 earthquake is an appreciation of its reminder that everything is impermanent. The “normal” life we take for granted is fragile, and thus not really normal.

Miriam Levering, Professor Emerita of Religious Studies and Asian Studies at the University of Tennessee, is an international advisor to Rissho Kosei-kai. She received her PhD from Harvard University in 1978. She has edited a book called Rethinking Scripture, a study of the concepts and uses of sacred texts in the major religious traditions, and has written many articles on women and gender in Chan and Zen Buddhism.

There is valuable meaning in doing the same things, in the same way, and as devotedly as you can. If you do this, the Way will most assuredly open up.

Rev. Ryojun Shionuma walks in the precincts of Yoshino Mikumari Shrine in 1991, during his Omine Thousand-Day Circumambulation Practice. The shrine is on the way from Kinpusenji on Mount Yoshino to the top of Mount Omine.

Natural Disasters and Religion:
In Search of an Alternative Way of Life by Ahangamage Tudor Ariyaratne

There are three factors at the root of all of our personal, national, and global problems. The first is greed; the second is hatred; and the third is ignorance, or delusion. These three evils within our own minds have become so well organized that they bring about all the man-made and, I believe, even natural disasters we are facing at this time.

Ahangamage Tudor Ariyaratne is president of Sarvodaya Shramadana, a rural development movement he founded in Sri Lanka in 1958, which is also involved in resettlement, reconstruction, and reconciliation activities in the war-affected north and east of Sri Lanka. The movement’s National Reawakening program aims to promote good governance and democracy. Dr. Ariyaratne has been awarded the Gandhi Peace Prize, the Niwano Peace Prize, and many other international honors for his work in peacemaking and village development.

The True Way to Liberation by Nichiko Niwano

Telling the Rest of My Story by Nikkyo Niwano

The twenty-eighth Niwano Peace Prize was awarded to Mr. Sulak Sivaraksa, a Thai Buddhist leader, who was honored for his contributions to promoting a new understanding of peace, democracy, and development and for his advocacy of environmental protection, firmly based on the core principles of his Buddhist faith. In this commemorative dialogue with Rev. Kinjiro Niwano, chairman of the Niwano Peace Foundation, on the theme “Social Reform Based on Buddhist Insight – Examining Western Values,” held on July 22, 2011, in Kyoto, he emphasized the necessity of becoming more humble and compassionate to others and also the importance of promoting dialogue with suffering people.

The Sutra of the Lotus Flower of the Wonderful Law Chapter 19: The Merits of the Teacher of the Dharma (3) by Nikkyo Niwano

This is the 108th installment of a detailed commentary on the Threefold Lotus Sutra by the founder of Rissho Kosei-kai, Rev. Nikkyo Niwano.