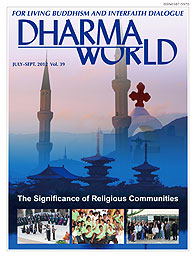 The Significance of Religious Communities

In many religious traditions, communities of believers play an important role in the religious life of individuals, both clerical and lay. For us Buddhists, as you well know, the Sangha, or community of practitioners, is one of the Three Treasures, together with the Buddha and the Dharma. In the Lotus Sutra, one of the four requisites for becoming a bodhisattva is “joining the assembly of those resolved to become awakened.”

The concept of a religious community may vary according to different religious traditions, but we believe that in any religion the community is important, because religion has true meaning only when its teachings are practiced by its followers and when its truth comes alive among people.

Any community risks the danger of schism or division, however, which can occur wherever people with different personalities form a group. Division can also result from various kinds of discrimination and lead to violence, and religious groups sometimes harm societies and individuals. That behooves us to reflect on some aspects of religious communities.

We believe that by examining religious communities of different faiths we can glimpse how faith comes alive through the interaction of people of faith and that we can appreciate the wholesome effects that the activities of religious communities have on the lives of individuals and the function of society.