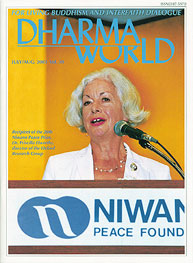 Walking the Buddha Way in Everyday Life by Nikkyo Niwano

In Praise of Mildness by Nichiko Niwano

Shakyamuni’s teaching is the teaching of peace. If we could control and cut off anger and violence–and thus conflict and war–then peace and harmony would appear.

The Spirit of Nonviolence and Civil Disobedience by Yoshiaki Iisaka

The only way we can avoid letting the twenty-first century become another “century of war” is to spread to the world the true spirit of nonviolence and civil disobedience. In this way, we can make our vision of peace a reality.

Yoshiaki Iisaka is president of Seigakuin University and professor emeritus of Gakushuin University. A leading advocate of interreligious dialogue and cooperation, he acted as the secretary general of the Asian Conference on Religion and Peace (ACRP) from 1996 to 2002 and presently serves as the director of the Peace Research Institute of the Japanese Committee of the World Conference on Religion and Peace (WCRP/Japan). He is the author of numerous books and articles, mainly on politics and religion.

The identification of emptiness and dependent co-arising is the foundational Mahayana teaching for world engagement. It is only when the silence of the ultimate meaning of emptiness has laid to rest all ideas of any stable being that conventional ideas of how to engage in the world are resurrected and the reality of the world–as co-arisen–is restored.

John P. Keenan, Ph.D., is a specialist in Yogacara Buddhism, professor of religion at Middlebury College in Vermont, and vicar of Saint Nicholas Episcopal Church in Scarborough, Maine. His publications include translations from the Chinese Buddhist canon and works on Christian scripture and theology as seen through the lens of Mahayana philosophy. With Harold Kasimow and Linda Klepinger Keenan, he has co-edited Beside Still Waters: Jews, Christians, and the Way of the Buddha (Wisdom Publications, 2003).

How Can Interfaith Organizations Address Global Problems? by Marcus Braybrooke

In today’s world, it is always hard to know what to do and how to do it. And it is even harder for a group of people to come to any kind of meaningful consensus. Is the interfaith movement part of the problem of globalization or part of the solution? The president of the World Congress of Faiths examines this very question in great detail.

Marcus Braybrooke, an Anglican vicar, has been involved in interfaith work for forty years. He is president of the World Congress of Faiths, a Peace Councillor, and cofounder of the International Interfaith Centre at Oxford and of the Three Faiths Forum. His books include Pilgrimage of Hope, Faith and Interfaith in a Global Age, and three anthologies of meditations, Bridge of Stars, Lifelines, and 1,000 World Prayers. Braybrooke and his wife, Mary, visited Japan, including the headquarters of Rissho Kosei-kai, in 1993.

A scholar who was born in Hiroshima, but who escaped the city’s atomic bombing, describes the life experiences that led to profound changes in his thinking and his role in the antinuclear movement.

Naomi Shohno, D.Sc., was professor at Hiroshima Jogakuin University from 1961 until his retirement in 1991; he is now professor emeritus. He serves as a consultant to the Hiroshima University Institute of Peace Science. Professor Shohno is the author of several books on the effects of the atomic bomb and nuclear disarmament, including The Legacy of Hiroshima and Jinrui Kyozon no Tetsugaku (The Philosophy of Coexistence). This essay is a translation of part of the latter book.

Through the tale of the fully-awakened buddha known as “Excellent in Great Penetrating Wisdom,” Shakyamuni Buddha teaches us that the best way we can serve the Buddha is to do something that will benefit all beings–indeed, it is by doing this that we are awakened to our own buddha-nature.

Lifting a Stone from the Heart by Ann Rinehard

An American member spoke at Rissho Kosei-kai of Oklahoma on July 4, 2001, describing how her experiences had taught her that what she does affects not only her own life but the lives of all.

Having heard that Gotama was staying in his mango grove in Pava, the blacksmith Cunda went to greet him. In gratitude for Gotama’s teaching him the Dhamma, Cunda invited him to his house and offered him some cooked mushrooms.

Enku and the Two-Headed Warlord by Takeshi Kuno

A powerful warlord of the Hida region, Ryomen Sukuna opened Senkoji temple some 1,600 years ago. Then, 400 years ago, the building was rebuilt as a Buddhist temple. The itinerant priest Enku stayed briefly at the temple during the Edo period, carving buddha statues during his stay. Some 60 statues of his–including Ryomen Sukuna’s image–are kept at the temple.

The Sutra of the Lotus Flower of the Wonderful Law
Chapter 7: The Parable of the Magic City (2) by Nikkyo Niwano

This is the seventy-first installment of a detailed commentary on the Threefold Lotus Sutra by the late founder of Rissho Kosei-kai, Rev. Nikkyo Niwano.