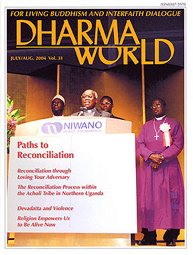 Reconciliation through Loving Your Adversary by Yoshiaki Sanada

If we do not strive to follow the way of God, how can we abandon vengeful hatred of our enemies and achieve forgiveness and reconciliation?

Yoshiaki Sanada is a professor of law who has taught Western legal history and comparative law based on Islamic law at Chuo University’s School of Law. Since 1994 he has been a guest professor at the Institute of Comparative Law of the China University of Politics and Law, in Beijing. He is also director of the Peace Research Institute, which is affiliated with the Japanese Committee of the World Conference of Religions for Peace.

The 21st Niwano Peace Prize was awarded to the Acholi Religious Leaders’ Peace Initiative (ARLPI), which works to end conflict and promote social justice, human rights, and peaceful coexistence among the peoples of the East African country of Uganda. The ARLPI is an organization in northern Uganda in which adherents of various religions and sects, including Islam and Christianity (Catholic, Orthodox, and Anglican), work together. Since its establishment in 1998, it has followed the path of nonviolence to end armed conflict, nurture human resources for the task of creating peace, and provide assistance to war victims through the work of over 400 volunteers, including its core membership of religious leaders, as well as individual staff members, peace committees in various districts, and peace supporters. The prize was presented in Tokyo on May 11. The following is the acceptance address by His Grace John Baptist Odama, archbishop of the Roman Catholic Diocese of Gulu and the current chairman of the ARLPI.

Building a World of True Peaceful Coexistence by Masao Higa

What the world needs now is a kind of ethnocultural symbiosis in which peoples of different cultures can coexist peacefully, recognizing and respecting the differences, and pursuing a better understanding of one another.

Masao Higa, professor at Okinawa University and director of its Institute of Regional Study, is also professor emeritus of the National Museum of Japanese History. He specializes in research on the social structure and local religious rites in East and Southeast Asia. His major works include Okinawa minzokugaku no hoho (Methodology in Okinawan Folklore Studies) and Josei yui to dankei genri (Female Predominancy and the Patrilineal Principle).

Knowing How to Be Content: The Way of Life of Kanzawa Toko by Shoji Tatsukawa

Shoji Tatsukawa, born in 1927, is professor emeritus of Kitasato University. He specializes in the study of disease and medical care from the perspective of cultural history and the history of mentality. He was awarded the Suntory Prize for Social Sciences and Humanities in 1980. His numerous books include Nihonjin no shiseikan (Japanese Views on Death and Life) and Taru o shiru iki-kata (The Way of Life That Knows Sufficiency).

“Vengeful Spirits” That Created Peace: A Message for Today by Kazuhiko Komatsu

Belief in vengeful spirits has weakened and is unlikely to revive. But people’s imaginative power is still confined within the narrow limits of their society, indifferent to those outside.

Kazuhiko Komatsu is a professor at the International Research Center for Japanese Studies in Kyoto, specializing in Japanese folklore and the anthropology of religion. He is the author of Kami-kakushi to Nipponjin (“Spiriting Away” in Japanese Folk Culture) and Ijinron (The Stranger in Japanese Folk Society).

Devadatta and Violence by Gene Reeves

There are many different versions of a wide variety of stories about Devadatta, but it is said that his evil led him to become the greatest enemy of the Buddha.

Creating a World of Harmony by Nichiko Niwano

We are acutely aware of the importance of promoting harmony—not only in interactions with others, but also in world situations. What exactly is harmony when seen from the perspective of religion? What should we bear in mind in our daily lives to help us achieve a world in which it exists? The following is a translation of a recent interview with Rev. Nichiko Niwano that originally appeared in Rissho Kosei-kai’s Japanese periodical Yakushin.

Salvation Always Has a Cause by Nikkyo Niwano

Dr. Juan Masia came to Japan from his native Spain in 1966 and was ordained a Roman Catholic priest in Tokyo in 1973. Since 1979, he has taught ethical theology and the history of philosophical thought in the faculty of theology of Sophia University. For ten years, starting in 1988, he taught life ethics at the faculty of theology of the Pontifical University of Comillas in Madrid. During the 1970s, he was the first to introduce the concept of “liberation theology” to Japan, and has played a leading role in the field of life ethics, having published a number of books and articles on the subject. While energetically engaging in dialogue with members of Japan’s religions, he has pursued Buddhist research, and in 2003 published a translation into Spanish of The Awakening of Faith, attributed to the Indian poet and Mahayana philosopher Ashvaghosha, and is presently taking part in an effort to publish a Spanish-language version of the Lotus Sutra. In February 2004 he returned to the Pontifical University of Comillas to head its Institute of Life Ethics. Before he left Japan, he granted us an interview on the social and religious issues of our time for Dharma World.

Learning to Live with a Stronger Faith by Charlotte Higa

This article is based upon the speech that Ms. Higa delivered at Rissho Kosei-kai of Hawaii on March 14, 2004. In it, she relates how practicing her faith helped her to live her life with more confidence.

Charlotte Higa is a member of Rissho Kosei-kai of Hawaii.

Kusinagar, the Place of the Buddha’s Death by Hajime Nakamura

The desolate site of Kusinagar leaves no doubt that it is authentic. Excavations have revealed the Nirvana Stupa erected in memory of the Buddha’s demise.

The Sutra of the Lotus Flower of the Wonderful Law
Chapter 8: The Five Hundred Disciples Receive the Prediction of Their Destiny (1) by Nikkyo Niwano

This is the seventy-seventh installment of a detailed commentary on the Threefold Lotus Sutra by the late founder of Rissho Kosei-kai, Rev. Nikkyo Niwano.