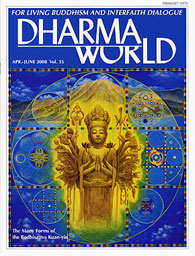 The Many Forms of the Bodhisattva Kuan-yin

One by One, Becoming a Hand on the Thousand-Armed Kannon by Yoshiko Izumida

The bodhisattva Kannon has been known for a long time, not only to members of the various sects of Buddhism, but also to the many Japanese who are not religious. I would even say there are almost no Japanese who have not seen an Eleven-Headed Kannon statue or a Thousand-Armed Kannon statue.

The Compassion and Wisdom of Kuan-yin by Gene Reeves

Respecting the hidden wisdom of ordinary people, we might see Kuan-yin devotion as a kind of skillful means used by the Buddha to bring the Dharma to such people in the midst of their suffering.

The sexual transformation from the masculine Avalokiteshvara to the feminine Kuan-yin seems to be a unique Chinese phenomenon that has fascinated many scholars.

Chun-fang Yu is Sheng Yen Professor in Chinese Buddhist Studies at Columbia University, New York. She also taught at Rutgers, the State University of New Jersey, from 1972 to 2004, serving as chair of the Religion Department beginning in 2000. Dr. Yu is the author of The Renewal of Buddhism in China: Chu-hung and the Late Ming Synthesis, and Kuan-yin: the Chinese Transformation of Avalokiteshvara, and is the coeditor of Pilgrims and Sacred Sites in China.

The Many Forms and Functions of Kannon in Japanese Religion and Culture by Mark R. Mullins

The bodhisattva became domesticated, moving beyond the original Buddhist sources to be appropriated more widely by large numbers of religious groups and institutions.

Mark R. Mullins is a member of the Faculty of Liberal Arts and Graduate School of Global Studies at Sophia University, Tokyo, where his teaching and research focuses on religion in modern society. He is the author and coeditor of a number of books, including Religion and Society in Modern Japan, Christianity Made in Japan, and Religion and Social Crisis in Japan.

“Deeply Female and Universally Human”: The Rise of Kuan-yin Worship in America by Jeff Wilson

Beyond gender, two closely connected aspects of the bodhisattva make her particularly appealing to convert Buddhists, compassion and the ability to take on any form to help those in need.

Jeff Wilson is assistant professor of religious studies and East Asian studies at Renison College, University of Waterloo, Ontario, Canada. He earned his Ph.D. in religious studies at the University of North Carolina. He specializes in Buddhism in North America and is the author of many publications on such topics as abortion rituals in Western Buddhism and Buddhist pluralism in the United States.

Becoming One with Kannon, the Bodhisattva of Compassion by Yasuaki Nara

A person who suffered a series of misfortunes throughout his life learned to accept reality and live with a positive attitude after entrusting everything to Kannon.

Until he retired in March 2006, Yasuaki Nara served first as president and later as chancellor of Komazawa University, Tokyo, where he is now a professor emeritus. The author of numerous books on Buddhism, he received a Litt.D. from the University of Tokyo in 1973 and taught the history of Buddhist culture at Komazawa University.

A Buddhist priest has come to understand that reading the Kannon Sutra as it is, and believing in it as it is, is all one needs to do.

Ryokan Ara, born in 1928, served as the head priest at temples of the Tendai Buddhist denomination in Fukushima and Miyagi prefectures before he became the first bishop of the Tendai Mission of Hawaii Betsuin. He is the author of many books on Buddhism and is also well-known for his paintings of buddhas and bodhisattvas.

The founder of Rissho Kosei-kai saw it as more than ordinary sympathy, which tends to have human attachments. In his view it is a practical model for helping others by preaching the Dharma.

Michio T. Shinozaki, former director of the General Secretariat of Rissho Kosei-kai, is president of the organization’s Gakurin seminary in Tokyo. He received a Ph.D. in religious studies from Vanderbilt University, Nashville, Tennessee, in 1988. He has contributed a number of articles on Buddhist ethics to various journals.

The Dancing Gods of Mount Chokai: The May Festivals of Warabioka and Fukura by Gaynor Sekimori

A special participant in two annual spring events describes their continuing social role in their communities, although few of the local people are aware of their origins.

Gaynor Sekimori graduated in Oriental studies from the Australian National University in Canberra. She received her doctorate from the University of Cambridge in 2000. A translator of Buddhist works, she is presently managing editor of the International Journal of Asian Studies (Cambridge University Press). A specialist in the history of Japanese religion, with a particular interest in Shugendo, she was ordained at Mount Haguro in 2005.

“Until . . . the Morning Star Rises in Your Hearts” by Notto R. Thelle

Encounters with Eastern religions can make people in the West aware that faith not only hears, but it also sees.

The role members now have to play will of course give proper respect to history and tradition, but at the same time embrace changes appropriate to our era.

The Sutra of the Lotus Flower of the Wonderful Law Chapter 13: Exhortation to Hold Firm (2) by Nikkyo Niwano

This is the ninety-third installment of a detailed commentary on the Threefold Lotus Sutra by the late founder of Rissho Kosei-kai, Rev. Nikkyo Niwano.