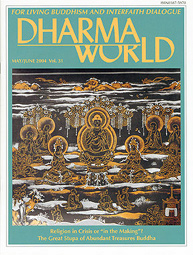 Grasping That Formless Entity We Call the Heart by Masahiro Mori

We labor under the delusion that what we see is the truth, causing us to have problems and suffer. To realize how incorrectly we are perceiving things is the first step toward being able to see into our own hearts.

Masahiro Mori, a specialist in robot engineering and control engineering, is a professor emeritus of the Tokyo Institute of Technology and president of the Jizai Research Institute. He is the author of many books on his specialty as well as works on Buddhism, including The Buddha in the Robot.

Religion in Crisis or “in the Making”? by Hiromasa Mase

A Buddhist Education in a European Country: Austria as a Case Model by Myoshin-Friedrich Fenzl

Austria has discovered that five principles are necessary in order to improve Buddhist education in non-Buddhist countries–but the most important task should be the training of competent Dharma teachers.

Myoshin-Friedrich Fenzl, leader of the Jodo-Shin movement in Austria, is the founder and deputy chairman of the Buddhist Society of Salzburg, which promotes a variety of Buddhist and interreligious activities, including meditation sessions, lectures, video performances, annual Buddhist festivals, religious education for children and youth, and hospital chaplaincy.

The Great Stupa of Abundant Treasures Buddha by Gene Reeves

This story makes free use of unusual images and events to advance a unified worldview indicating that the Buddha is somehow represented throughout the universe.

Nikkyo Niwano, the late founder of the Buddhist association Rissho Kosei-kai, was an honorary president of the World Conference of Religions for Peace (WCRP) and was honorary chairman of Shinshuren (Federation of New Religious Organizations of Japan) at the time of his death in October 1999.

Every year brings new encounters, and new encounters, we hope, will bring a year of hope. To make this a reality it is crucial that we treasure the “once-in-a-lifetime meetings” that each day brings us. Following is a translation of a recent interview with Rev. Nichiko Niwano that originally appeared in Rissho Kosei-kai’s Japanese periodical Yakushin.

How the Buddhist Experience Changed My Life by Mike Murry

An American member of Rissho Kosei-kai addressed the anniversary celebration of Shakyamuni’s attaining of supreme enlightenment held at the Los Angeles branch on December 7, 2003. He described the many changes in his life for the better brought about by his introduction to Buddhism.

Mike Murry is a member of Rissho Kosei-kai of Los Angeles.

The Last Words of the Tathagata by Hajime Nakamura

According to the Buddha’s final utterance, the purpose of Buddhism is twofold: to realize the impermanence of all things and to devote oneself to religious training.

The Sutra of the Lotus Flower of the Wonderful Law
Chapter 7: The Parable of the Magic City (7) by Nikkyo Niwano

This is the seventy-sixth installment of a detailed commentary on the Threefold Lotus Sutra by the late founder of Rissho Kosei-kai, Rev. Nikkyo Niwano.