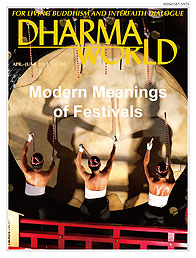 The Oeshiki festivals allow participating young members to be at one with the mind of the Buddha and widen their circle of close friends.

Chaos and Cosmos: Cultural Revival in the Wake of Natural Disasters by Minoru Sonoda

The experience of recovering unbowed from natural disasters, from which Japan has suffered many times in its history, rising again out of catastrophic chaos through a trust in the regenerative power of nature and the ties binding the community, has been handed down to us within our religious culture in the form of shrine festivals and performing arts.

Minoru Sonoda is the head priest of Chichibu Shrine, in Saitama Prefecture. He took his doctoral degree at the University of Tokyo in 1965. He was a Professor at Kokugakuin University in Tokyo and then at Kyoto University until he retired in 2000. He is now a Professor Emeritus of Kyoto University. He has published widely and has edited many collections and anthologies on Shinto.

In the period immediately following the tsunami, most folk performers in and around the devastated areas thought it was not possible to perform in such disastrous times. However, they soon remembered that their “arts” were originally rites of spirit pacification, and they started performing wherever they could, intentionally reestablishing the original meaning of their dances.

Irit Averbuch is an Associate Professor in the Department of East Asian Studies at Tel Aviv University. She received her PhD from Harvard University in 1989. Her general fields of interest include Japanese religion, especially religious folk culture in Japan. She is the author of The Gods Come Dancing: A Study of the Japanese Ritual Dance of Yamabushi Kagura and of articles in leading academic journals.

Kagura: Dramatic Interplay between Nature and Humanity by Masataka Suzuki

Kagura has diversity – it may be a solemn ritual inviting the deities to a sacred ritual site, or equally a secular event associated with town revitalization and the promotion of the local area.

Masataka Suzuki, PhD, is a Professor in the Faculty of Letters at Keio University, Tokyo, and Vice Director of Keio Institute of East Asian Studies. He specializes in cultural anthropology and religious studies and has engaged in area studies in Japan, South India, Sri Lanka, and southwest China for more than three decades. He has written many books and articles.

The Cultivation of Memory and Invention in Contemporary Thai Festivals by Rachelle M. Scott

Some Thai festivals are reputed to have ancient origins that are based on the agricultural seasons and stories from Hindu, Buddhist, and Chinese traditions, while others are wholly new – the products of skillful tourist marketing or new cultural tastes and sensibilities.

Rachelle M. Scott is Associate Professor and Associate Head at the Department of Religious Studies of the University of Tennessee, Knoxville. Her first book, Nirvana for Sale?: Buddhism, Wealth, and the Dhammakaya Temple in Contemporary Thailand, examines contemporary debates over monastic and lay wealth in Thailand. Her current research focuses on stories of powerful female spirits, the impact of new media on religious authority and community, and the role of the Buddhist sangha in global Buddhism.

Shugendo, Festivals, and the Performing Arts by Gaynor Sekimori

In recent years there have been efforts to embrace lost Shugendo traditions to create a distinct local culture that enriches the whole community and is attractive to visitors.

Gaynor Sekimori is a Research Associate in the Centre for the Study of Japanese Religions at the School of Oriental and African Studies, University of London, and concurrently Visiting Professor at Kokugakuin University, Tokyo. She received her doctorate from the University of Cambridge in 2000. She was managing editor of the International Journal of Asian Studies (Cambridge University Press) and a member of the Institute of Oriental Culture at the University of Tokyo from 2001 to 2007.

The Ties That Bind Families by Nichiko Niwano

On the Islamic View of Global Ethical Values by Anis Ahmad

How are we to determine values that can be globally acceptable? There can be at least five benchmarks for evaluating and judging global relevance, acceptability, and application of values: universality, consistency and practicality, flexibility, simplicity and understandability, impartiality.

Anis Ahmad is a Professor Emeritus of Comparative Ethics and Religion and Vice Chancellor at Riphah International University, in Islamabad, Pakistan. He is also editor of the quarterly The West and Islam, published in Islamabad. He can be contacted at anis.ahmad@riphah.edu .pk or anis@anisahmad.com.

An Ongoing Journey into Buddhism An interview with Dr. Elizabeth J. Harris

Dr. Elizabeth J. Harris, president of the European Network of Buddhist-Christian Studies, visited Rissho Kosei-kai headquarters in Tokyo on September 11, 2012, to confer with interfaith affairs directors. Dharma World interviewed her about her journey into Buddhism and her perspectives on Buddhist-Christian encounter in Europe.

Elizabeth J. Harris is an Associate Professor in the Comparative Study of Religion at Liverpool Hope University. From 1996 to 2007, she was the executive secretary for interfaith relations for the Methodist Church in Britain. Dr. Harris has been involved in Buddhist-Christian encounter for more than twenty years and serves as president of the European Network of Buddhist-Christian Studies. Her latest book is Buddhism for a Violent World (London: Epworth Press, 2010; now published by SCM Press).

Spiritual Plenty from One Cup of Tea by Sojitsu Kobori

In the Way of Tea, we constantly focus on what we ourselves should do so that our guests are satisfied. That being said, it is still impossible to learn in a short time to put others first. That is why daily practice is so important.

Sojitsu Kobori is the thirteenth Grand Master of the Enshu Sado School. He is a director of both the Tokyo Sado-kai and Gakushuin University, Tokyo, and is an honorary lecturer at the National University of Singapore. He has received Zen training at Keitoku Zen’in in Tokyo, a temple of the Daitokuji school of the Rinzai sect of Zen Buddhism. He is the author and coauthor of several books in Japanese on the Way of Tea.

Our Future Depends on “A Little” by Keibo Oiwa

The ability to enjoy “a little” is a function of great wisdom. Humanity’s future hangs on this. It depends on whether we can get back enough wisdom to stop depleting resources and start living with less energy use.

Keibo Oiwa (aka Shin’ichi Tsuji) is a cultural anthropologist, author, and environmental activist. He has a PhD in anthropology from Cornell University and lived outside Japan for sixteen years. Since 1992, he has taught in the International Studies Department of Meiji Gakuin University in Yokohama. He is the founder of the Japanese NGO Sloth Club, leader of the Slow Movement, and the author of more than fifty books in Japanese, Korean, and English.

Simple Living for Our Shared Future by Mary Pat Fisher

For decades, Mary Pat Fisher has traveled the world studying and writing about the essence of religions. Since 1991 she has lived in the outskirts of New Delhi at the Gobind Sadan Institute for Advanced Studies in Comparative Religion, where people of all faiths and all social levels live, work, and worship together. Her books about the world’s religions include the acclaimed textbook Living Religions, now in its ninth edition.

The Restructuring of Rissho Kosei-kai by Nikkyo Niwano

The Sutra of the Lotus Flower of the Wonderful Law Chapter 20: The Bodhisattva Never Despise (4) by Nikkyo Niwano

This is the 112th installment of a detailed commentary on the Threefold Lotus Sutra by the founder of Rissho Kosei-kai, Rev. Nikkyo Niwano.