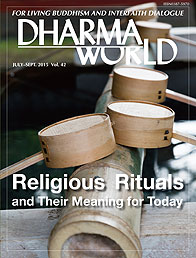 Religious Rituals and Their Meaning for Today

The Penguin Dictionary of Religions offers a broadly applicable description of the often contested category of ritual, defining it as “patterned behavior, often communal, consisting of prescribed actions performed periodically and/or repetitively.” While the study of rituals has served as a cornerstone in anthropological approaches to various cultures, rituals are integral to the social life of vast numbers of people.

Rituals are essential to religion and religious institutions. Rituals empower and integrate members of religious communities, encode and communicate religious ideals, and accompany or illuminate many kinds of religious experience. Rituals are also ways of showing reverence for the sacred.

As many societies become increasingly secular, however, religion plays a less important role in people’s lives, and persisting forms of religion undergo substantial change. Japan is a case in point. Have religious rituals lost social relevance, and are they also becoming a less visible part of religion?

In Japan, where form holds special importance for many types of traditional arts, rituals continue to be important in the training and performance of artists. Rituals are still an essential part of many rites of passage and festivals, even if their religious origins are often forgotten. However, do rituals continue to be a path to religious truth?