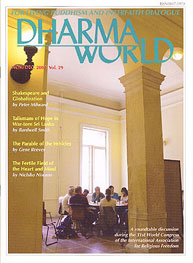 Problems the Sangha Must Tackle by Nikkyo Niwano

The Fertile Field of the Heart and Mind by Nichiko Niwano

We are like fields that generate merits. These fields of merits are none other than the fields of the heart and mind within each of us. The more we cultivate these fields, and give them water and light, the richer the harvest we will gain.

Conference on the Lotus Sutra

A Conversation about the Lotus Sutra and Zen by Stephen Covell

Stephen Covell is currently a visiting scholar at the University of Tokyo, where he is working on a project concerning Buddhism and morals education in Japan. He received his Ph.D. from Princeton University in 2001. His dissertation was on contemporary Japanese Buddhism. In fall 2003 he will begin teaching as an assistant professor at Western Michigan University.

This article recounts an important dialogue between Buddhists and Christians that was held this past spring. The author is a Benedictine monk of Saint Anselm’s Abbey in Washington, D.C., and chairman of the theology department at the Catholic University of America. He participated in a conference on the Lotus Sutra that was sponsored by Rissho Kosei-kai in July 1994.

Shakespeare and Globalization by Peter Milward

Globalization is not just something that affects us in today’s world. Indeed, with the great voyages of discovery of the fifteenth and sixteenth centuries, Shakespeare’s age was one in which men thought to put “a girdle round about the earth.” This article takes a look at what globalization was then and what it should be today.

Peter Milward is a Jesuit priest and former dean of the Faculty of Modern Culture at Tokyo Junshin Women’s College, professor emeritus of Sophia University in Tokyo, and chairman of its Renaissance Institute. Fr. Milward is the most celebrated Shakespearean scholar in Japan and is the author of more than 300 books and booklets on religion, literature, and culture.

Talismans of Hope in War-torn Sri Lanka by Bardwell Smith

An American scholar takes seven stones with him on a trip to Sri Lanka, and places all but one in what to him are important locations in a symbolic prayer for peace and reconciliation. The seventh stone, however, finds a different home, but one that is as meaningful and significant as the others.

Bardwell Smith is John W. Nason professor of Asian studies emeritus, Carleton College, Northfield, Minnesota. His research field is Buddhism and the social order in Sri Lanka and Japan. Professor Smith has edited a number of books dealing with Asian religions in South and East Asia. This essay is a revised portion of a longer article that appeared in a volume of essays, Excursions and Explorations: Cultural Encounters between Sri Lanka and the United States, Tissa Jayatilaka, ed. The volume was published by the Fulbright Commission in Colombo, Sri Lanka, earlier this year.

The Parable of the Vehicles by Gene Reeves

The Buddha, like any teacher, has to use appropriate means in order to lead others to the realization of their own potential. In chapter 3 of the Lotus Sutra, this is illustrated by the Buddha’s tale of how a father uses his wits and skillful means to persuade his children to leave a burning house.

Living to the Fullest

A former maintenance technician at a nuclear-power plant decided to change his job and devote his life to being of service to others. Luckily, supported by family and friends, he now works in a nursing home, helping others–as well as himself–to live life to the fullest.

A Buddhist Statue Dressed in Elegant Robes by Takeshi Kuno

Japanese Buddhist art includes several statues that were carved naked and then clothed in beautiful silk robes. This statue of the bodhisattva Jizo, from Nara’s Denkoji, is exceptionally beautiful, with its expression of great compassion.

Falling Ill along the Way of the Journey by Hajime Nakamura

Upon leaving Ambapali’s grove, the Buddha went with Ananda to Beluva, but there he became very ill. When begged by Ananda to give teachings, he said that Truth is the possession of all people. He added that all that is necessary is to practice and meditate upon the Truth.

The late Hajime Nakamura, an authority on Indian philosophy, was president of the Eastern Institute in Tokyo and a professor emeritus of the University of Tokyo at the time of his death in October 1999. This ongoing series is a translation of Gotama Budda, vol. 2, Tokyo, Shunjusha, 1992.

The Sutra of the Lotus Flower of the Wonderful Law
Chapter 5: The Parable of the Herbs (4) by Nikkyo Niwano

This is the sixty-seventh installment of a detailed commentary on the Threefold Lotus Sutra by the late founder of Rissho Kosei-kai, Rev. Nikkyo Niwano.