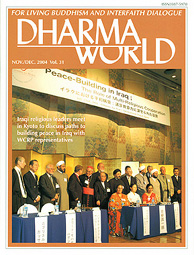 Yoshiaki Sanada is a professor of law who has taught Western legal history and comparative law based on Islamic law at Chuo University’s School of Law in Tokyo. Since 1994 he has been a guest professor at the Institute of Comparative Law of the China University of Politics and Law in Beijing. He is also director of the Peace Research Institute, which is affiliated with the Japanese Committee of the World Conference of Religions for Peace.

All religious faith is the result of an acknowledgment that something exists beyond our physical longing, life, and understanding.

H.E. Son Soubert is a member of the Constitutional Council of the Kingdom of Cambodia, appointed by His Majesty King Norodom Sihanouk, and is a professor in the Faculty of Archaeology of the Royal University of Fine Arts, Phnom Penh. During 1993–98, he served as second vice-president of the National Assembly (parliament) and in March 1998, he became president of the Son Sann Party, elected by the congress of the party.

Faith and Interfaith in Britain, 2004 by Richard Boeke

A leading advocate of interfaith dialogue calls on us to develop a sense of oneness with all that lives, taking the first step in a spiritual life.

Christianity is based on the event of divine forgiveness. In some early Buddhist texts, the emphasis falls not on forgiving, but on the foolishness of taking offense in the first place.

Joseph S. O’Leary studied literature, philosophy, and theology in Maynooth College, Ireland, and in Rome and Paris. Resident in Japan since 1983, he has participated in research at the Nanzan Institute for Religion and Culture, and lectures in the Department of English Literature at Sophia University. His publications include Questioning Back: The Overcoming of Metaphysics in Christian Tradition (Minneapolis, 1985) and Religious Pluralism and Christian Truth (Edinburgh, 1996). This article is adapted from his article that appeared under the same title in the Japan Mission Journal (Spring 2002, Vol. 56, No. 1).

All of Us, Everywhere, Are Life’s Children by Nichiko Niwano

This concept, Rev. Niwano says, is itself the invaluable spirit of living in a world of coexistence. The following is the text of the address delivered by Rev. Niwano to the 43rd General Assembly of the Unitarian Universalist Association (UUA) held in Long Beach, California, on June 25.

The Importance of the Ninth Lotus Sutra Conference by Christopher Rupp

Christopher Rupp is a second-year graduate student in the Department of Religious Studies at the University of Pittsburgh. His work focuses on East Asian Buddhism in the medieval period, particularly late Heian and early Kamakura Japan.

By admitting women into the Sangha as nuns, the teaching that all are equal won out, but the reality of the monks’ sexual desire and of consequent disrespect for women did not go away.

Giving Thanks Today for the Trials of Yesterday by Yoshie Sugawara

A member who is a working wife and mother learns from her chapter leader that she herself was partly responsible for problems not only with her teenage son, but also with her husband.

Yoshie Sugawara is a member of the Toyama Branch of Rissho Kosei-kai.

The Final Rites for the Buddha by Hajime Nakamura

Both Sanskrit and Pali texts mention that perfumes, garlands, and musical instruments were brought, suggesting that these were standard items at funerals.

The Sutra of the Lotus Flower of the Wonderful Law
Chapter 8: The Five Hundred Disciples Receive the Prediction of Their Destiny (3) by Nikkyo Niwano

This is the seventy-eighth installment of a detailed commentary on the Threefold Lotus Sutra by the late founder of Rissho Kosei-kai, Rev. Nikkyo Niwano.