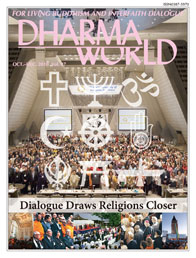 The Significance and Direction of Interreligious Dialogue by Keiichi Akagawa

Not surprisingly, all religions and sects are fundamentally based on an exclusionary absolutism that holds that their own doctrines and practices are the best. Consequently, it would stand to reason that most religions and sects are at times exclusive and dogmatic. In fact, if viewed from the perspective of world history, one could say that the history of religion is a history of disputes concerning each religion’s exclusionary absolutism. . . .

Keiichi Akagawa is head of the External Affairs Group (Interfaith) of Rissho Kosei-kai. He has also served as general affairs director of the Japanese Committee of the World Conference of Religions for Peace.

In many parts of the world the social climate is not conducive to closer ties, but religious leaders have an important part to play in improving this situation.

Roman Catholic Archbishop Michael L. Fitzgerald was secretary of the Pontifical Council for Interreligious Dialogue from 1987 to 2002, and its president from 2002 to 2006. He is currently the apostolic nuncio in Egypt and the Holy See’s delegate to the League of Arab States. He was also the director of the Pontifical Institute for Arabic and Islamic Studies in Rome from 1972 to 1978.

Critical Challenges in Interreligious Dialogue by A. Rashied Omar

An Islamic authority warns that religious pluralism, unlike religious plurality, is not a given fact in any society. It constitutes an ongoing process in which different religious traditions learn to interact positively with each other.

A. Rashied Omar, PhD, is a research scholar in Islamic studies and peace building at the Joan B. Kroc Institute for International Peace Studies, University of Notre Dame, Notre Dame, Indiana. In addition to being a university-based researcher and teacher, Dr. Omar puts theory into practice. He serves as the coordinating imam at the Claremont Main Road Mosque in Cape Town, South Africa.

Peace with Justice – an Interfaith Perspective by Olav Fykse Tveit

When we are mutually accountable to one another, engage both firmly and openly, speak clearly, and listen carefully, our dialogue becomes robust. It challenges, stretches, tests, and renews.

Some Reflections on Interreligious Dialogue by Andrea Bellandi

Dialogue does not involve only theoretical thinking, necessary as it may be. It must be . . . a meeting at the level of spiritual life and religious experience, which are at the heart of all religions.

Andrea Bellandi was born in Florence, Italy, in 1960. A Catholic priest since 1985, he completed his studies in Rome at the Pontifical Gregorian University, receiving a doctorate in theology with a thesis on the thought of Joseph Ratzinger (Pope Benedict XVI). Currently, he teaches “Introduction to Theology” and “Fundamental Theology” on the Theological Faculty of Central Italy (Florence), where he was dean from 2003 to 2009.

From Encounter to Dialogue by J. P. Mukengeshayi Matata

During the second half of the last century, the manner of thinking of religions changed from one of intolerance and exclusivity to a new pluralistic understanding. This was largely due to the increase in research and knowledge about religions outside of Western Christianity.

Rev. J. P. Mukengeshayi Matata has been a member of the mission society of the Congregation of the Immaculate Heart of Mary since 1981. He studied philosophy and theology in Kinshasa, RD Congo, and in Cameroon before coming to Japan in 1989. He received his MA in theology from Sophia University, Tokyo, in 1995. He is currently director of the Oriens Institute for Religious Research in Tokyo and a member of the board of the International Shinto Research Institute.

Religion is a player in this world and society. It has a tradition of ethical and moral values to offer for the discourse in society. Every religion has a contribution to make.

Hans Ucko is president of Religions for Peace Europe and co-chair of the Day of Prayer and Action for Children of Arigatou Foundation, Tokyo. Dr. Ucko was for many years responsible for the interfaith dialogue program of the World Council of Churches in Geneva and has written extensively on interreligious relations and dialogue.

An interview with Rev. Juan Masiá

Rev. Juan Masiá has spent most of his life in Japan since 1966 and was ordained a Roman Catholic priest in Tokyo in 1973. Since that time, he has been a leading proponent of interreligious dialogue in Japan and his native country of Spain. When Father Masiá visited Rissho Kosei-kai in June of this year, Dharma World interviewed him on how dialogue between people of different cultures and religions can be successfully promoted.

Rev. Juan Masiá was a professor of Christian ethics and the history of philosophical anthropology in the Faculty of Theology at Sophia University, Tokyo, where he is now a professor emeritus. He now teaches Christian theology at St. Thomas University in Amagasaki, near Kobe. In 2008 he published a Spanish translation of the Threefold Lotus Sutra. He also serves as a special fellow of the Peace Research Institute affiliated with the Japanese Committee of the World Conference of Religions for Peace.

The Task That Interreligious Dialogue Presents by Nichiko Niwano

Rissho Kosei-kai’s president, Rev. Nichiko Niwano, delivered an address in the guest palace of the Italian Ministry of Foreign Affairs in Rome on June 16, 2009, during the opening ceremony of the Fourth Summit of Religious Leaders, held before the G8 summit of leading industrialized nations convened in July in L’Aquila, Italy. The following are adapted excerpts from that address.

One of the most important values in Buddhism is tolerance, not a “lazy tolerance,” but rather accepting everything and everyone as they are. This value implies an acceptance of plurality.

Assistant Professor Dr. Parichart Suwanbubbha is a vice director of the Mahidol University Research Center for Peace Building in Nakornpathom, Thailand. She is a member of the board of Globethics.net Foundation in Geneva, Switzerland, and is a secretary of the Inter-Religious Council for Peace – Thailand.

Working Together for Lasting Peace by Nikkyo Niwano

Self-Defense and Defense Against the Self by Jack Miles

Opening remarks at the Symposium on Religion and Peace, held under the theme “Global Militarization – Religions’ Response,” at the Student Center of the University of California, Irvine (UCI), on May 13, 2010.

Jack Miles, distinguished professor of English and religious studies with the University of California at Irvine and senior fellow for religious affairs with the Pacific Council on International Policy, is a writer whose work has appeared in many publications. His book God: A Biography won a Pulitzer Prize in 1996. He is currently at work as general editor of the forthcoming Norton Anthology of World Religions.

The Significance for Today of Gandhian Philosophy

Ms. Ela Gandhi, a South African peace activist and a granddaughter of Mahatma Gandhi, visited Japan from October 30 to November 7, 2009, to call at Rissho Kosei-kai’s headquarters and Dharma Centers and to meet Japanese parliamentarians. Dr. Pema Gyalpo interviewed Ms. Gandhi in Tokyo for Dharma World on her long-standing involvement in social work in South Africa and on the unfading significance of the Gandhian philosophy in the twenty-first century.

Ela Gandhi, a member of parliament in South Africa from 1994 to 2004, is founder of the Gandhi Development Trust and chancellor of the Durban University of Technology. She also serves as a member of the board of trustees of the Commission on Religious Affairs of the African National Congress and as an honorary president of the World Conference of Religions for Peace.

Pema Gyalpo, PhD, is a professor in the Faculty of Law and the Graduate School of Toin University of Yokohama. His fields of research include international and regional studies in South and Central Asia. Born in Tibet in 1953, he has lived in Japan since 1965 and now serves as director emeritus of the Tibet Culture Center in Tokyo. He is also a popular columnist and commentator for Japanese media.

“The Threefold Lotus Sutra: A Modern Commentary” by Nikkyo Niwano is not included in this issue. The next installment will appear in the January – March 2011 issue.